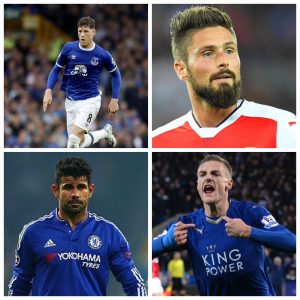 Anyone, preferably two, will do

Anyone, preferably two will do, says the headline but to be honest the next four days of the summer transfer window will define Everton’s season, not the business done before.  Frankly I can’t see how it’s just two new arrivals we need when clearly we are at least four or five players short of a squad capable of coping with the demands of competing in four competitions.

There was some real rubbish spouted on social media after our pathetic capitulation to Chelsea at Stamford Bridge. The Positivity Police were out in force again, defying reality and refusing to face an uncomfortable truth. Namely, that despite some clearly decent arrivals, we’ve let the best striker in the country or close to,it, depart for Utd with, it seems, not a clue how to replace his stunning 25 goals a season. It’s been two months since Rom left and now we seem to be in panic mode trying to replace him, mainly because Plan A, find the goals from midfield, already looks doomed.

According to some we lost at Chelsea because we were tired, which reflects a tough week but is just such a scary thought given we face many similar weeks between now and Christmas.  Yes Chelsea are quite good. Yes we’ve had a hard week. But it feels like we arrived at the Bridge in exactly that frame of mind, and Koemans setup meant we invited waves of pressure which surprisingly only produced two goals.

This was a desperately poor performance from an Everton squad which has to cope better with injuries. But there are horrible gaps in this squad and yes that’s even with a lot of money spent. There is no pace, at all. We have little width and now the manager has fallen out with Mirallas. We need a left sided centre back who can somehow also be a cracking left back. And yes we need a no9 who can at least manage 15 or so goals a season.

Me ? I think we must have a Vardy type player who can get wide right and play up top if needed, off a strong centre forward who can actually hold the ball up. We just don’t have enough until Christmas and the return of Seamus, Bolassie and either Ross himself or if he’s sold, his replacement, will make a big difference. But by then the damage may have been done.

It honestly isn’t being negative to call it as you see it. Things are not great. The hype has been magnificent but that’s what it is, hype. We’ve not really played well yet.

Rooney looks clever and hard working and has goals in him alongside a superb commitment to his favourite club. Gylfi is well over priced but a class act when he gets fit. Keane and Pickford very sound buys. Sandro ? I’m unsure about but let’s give him the time he deserves. Klassen the same. And then there’s the enigma that’s Ross B. I don’t think he wants to leave but he got fed up being slated in public by his manager and in truth his in and out form didn’t help his case. However, am I the only one thinking he might yet turn things round if he stays ?

But if he’s sold then that money, and a lot, lot, more must be re invested by 23:00 on 31st August because we honestly will not handle what’s to come without four or five quality arrivals.