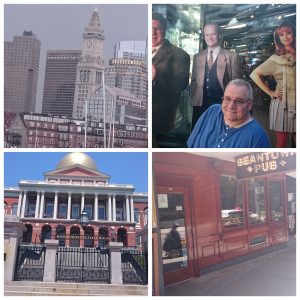 Boston really is a cool city, even when it’s very hot !

The Amtrak Acela Express winds its way from NYC’s Penn Station to Boston South station via some lovely sea front scenery and in only just over 3.30hrs your arriving in this laid back and rather special city. The Acela Express is really accessible. It’s a low ramp or ‘bridge plate’ between platform and coach or carriage as us Brits call it. The wheelchair space is not quite as large as that on a Virgin Trains Pendolino but it’s ok and my Salsa R1 (no foot plates) fitted fine. The large accessible toilet is surprisingly easy to use, tho as the Acela gets up speed I’d advise against too much of the ‘transferring onto the loo ‘ activity ! But really, this is a very accessible train, albeit an expensive one as all seats are either in a business class standard coach or a First Class coach. 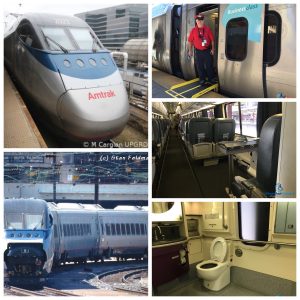 Where did we stay ?

DoubleTree by Hilton, Boston South Backbay area. Next to a large hospital and helpfully a fully accessible Metro T station, this was from a number of viewpoints the best holes on our USA trip, certainly the most accessible. Large bedroom with two huge beds, room to manoeuvre, air conditioning, a safe, a fridge, a large TV. And, a cracking  wet room bathroom with very large, deep, well designed shower seat, decent railed areas around shower and loo. All parts of the hotel accessible. Best vfm. Location good once you leave the rather depressing and grubby Chinatown area. Close to city centre, Boston Common, the harbour, a number of Metro T stations and links to the North Station and overland services. Mid range cost. 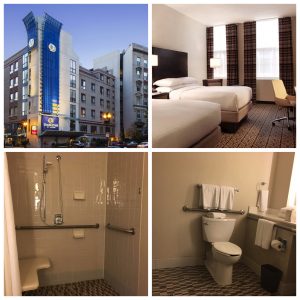 What did we see and do ?

Five days isn’t really enough to see all that Boston has to offer but it does give you a sense of the place, its vibe, it’s laid back view of life and just how gorgeous this part of the USA is to live in and enjoy. We loved the accessible Old Town trolley bus tour which we’d seen and used before in Washington. About one in two buses have the sturdy if temperamental wide wheelchair side or rear lift. The drivers commentary is always interesting, informative and sometimes very funny ! It’s an expensive 90 mins but worth every cent.

The ‘free’ additional 45m tour of Boston Harbour not so much. It wasn’t even 45 mins, the commentary is tired and the wheelchair access very tough and I can say this having nearly tipped my 110kg plus moi powerchair right over backwards trying to board on a strange humpback ramp ! I didn’t end up in the harbour thanks to a couple of burly sailors but it wasn’t fun.

Try the Chart House restaurant on the harbour. The prime rib and seafood is superb. The building is the second oldest in the city and you are treated to a scroll with the Declaration of Independence and the constitution so you understand a little about the Tea Party history ! Pricey but well worth the treat. We wandered into the Fannueil and Quincy Market areas which look very good in the sunshine and are a bit more accessible than Covent Gardens’ cobbles ! 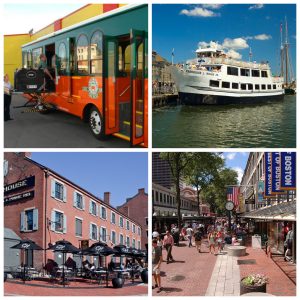 Take the accessible Boston Old Town Trolley Bus, give the ship a miss!!

Whatever you do don’t miss the chance to see Harvard and take the amazingly cheap $24 for two people guided tour ! Our guide was ‘Liz’ a fourth year student taking Molecular Biology ! It’s 60 minutes of insight, corny jokes, Q&A and as Liz put it, beautiful buildings mixed with ugly horrors from the 60’s. The Russell House Tavern does a very decent lunch in its air conditioned accessible basement with a small number of gluten free options and at a reasonable cost.

Salem in 94f heat ! We got the overland train to this place of witches and gallows and aweful pavements ! It was fun and some lovely walks and harbourside eats. But try to do it when it’s cooler as there’s not a lot of shade in this place except the graveyards which were not that accessible and a bit spooky !

Boston Common in the sunshine is gorgeous and you can easily spend a day in the area, and arrive back at the hotel totally shattered. See the bronze ducks and the quaint lake boats paddled cycle style by very fit people ! The Boston gardens are lovely, the massive Bunker Hill back into the city centre not so much !

The Boston Public Market near the Common is the best in the city. We wound up back at the harbour, at a restaurant called “Tia’s” alongside the ship shaped Marriott Hotel. Wow. It’s sensational. We had the lobster of course, with background commentary by our brilliant server who, exceptionally due to the one handed nightmare in prospect otherwise, expertly extracted all the meat from my two x 1lb Maine Lobsters ! Gluten free options there were, and my wife’s lobster roll was delicious. All for less than $65 which trust me really is a bargain ! On the way back to the Doubletree there was even a chance for a picture at Dorothy’s house from the Wizard of Oz, my wife’s fave film and after ten miles in 94f that air conditioning was very welcome ! 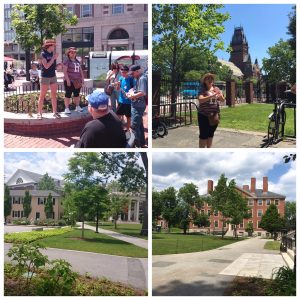 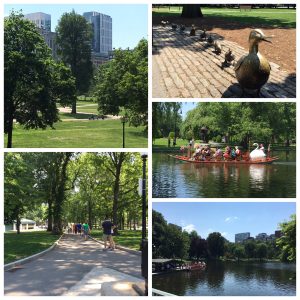 Boston Common and surrounding area, a great day out 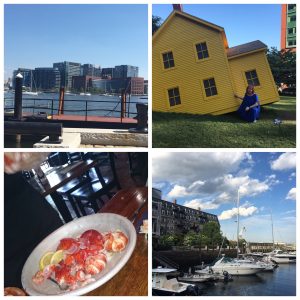 Quite easy actually. It’s a relatively compact city for walking, tho there are some wicked hills ! Buses are accessible and cheap. The Metro or the T as it’s known is nearly all accessible but watch out for the odd station with higher than usual ‘gap’ between platform and train. The trolley bus tour really does give you a great plan as to where to walk to and when. The overland train services from North and the larger South stations are good and the Red Caps friendly, tho the expected $3-$5 ‘tip’ per bag adds up during the weeks away ! However, as in Washington and NYC don’t begrudge the Red Caps this tip or fee as we called it, it’s a great service for anyone less mobile and you actually get to,the right platform at the right time. 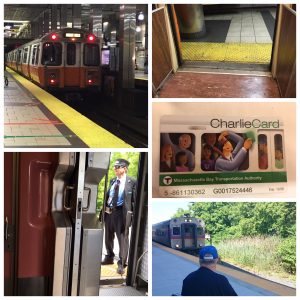 Getting around Boston is surprisingly easy……

So that’s Boston. A brilliant city. Lovely people. Very accessible and the food, well did I mention the lobster and the prime rib !

If you’d like to know a bit more about the disability access we came across in Boston don’t hesitate to ask, just lob me an email on efcmark777@yahoo.co.uk