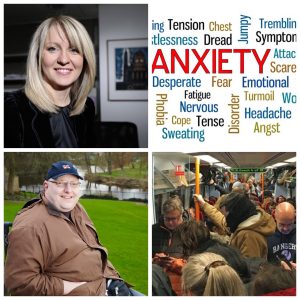 Four pictures that in different, but linked ways, highlight the fact that 2018 may be another tough year for disabled people.

Pictures can be worth many words but in this case I urge you to click the links below and make the connections between apparently different stories that have huge impact for disabled people in 2018.

Esther McVey MP back at DWP but this time as Secretary of State. My guess is that this news will be greeted with huge concern by those whose lives have been or could be massively impacted by the changes that see Disability Living Allowance (DLA) becoming Personal Independence Payment (PIP) via a controversial assessment process. Esther is not exactly a unifying or reassuring force as far as many disabled people are concerned. A few years ago she was criticized for seeming to set out a very clear ‘end game’ for the DLA to PIP process. This despite the obvious observations which added how you can in one breath suggest an independent assessment system is fair and reasonable yet before it has even begun its work decide what the outcome will be in terms of lost benefits / savings ?

Next read the heartfelt and powerful story of how one of the most influential leaders in the disability community in the North West sees the ATOS and yes DWP led assessment process. It’s not a comfortable read from Dave Thompson MBE, CEO of Warrington Disability Partnership. His piece on Facebook is an essentially personal reflection of what being caught up in the DLA to PIP assessment process actually means in reality. There is desperation here, anger, dismay, disbelief, and above all a degree of stress and anxiety that is nothing short of cruelty.

Few really understand the way this appalling Government policy is destroying many lives. The sound byte world we live in has seen the Government successfully deflect intense criticism of the assessment process because, sadly, ten years of those sound bytes seem to have persuaded middle England that this isn’t about cruelty and inappropriate policy, but it is about benefit scroungers and cheats, also known by some newspapers as disabled people. It’s wrong. Of course it is. Reasonable people reject such nonsense. But read Dave’s piece again and ask yourself how? Really, how can this be in our society in 2018? But then remember that our society currently tut tuts at the news that we have more Foodbanks in the UK than most countries in Europe and farther afield, yet as long as it doesn’t impact the rest of us it can carry on being a sound byte headline along with others on Homelessness, Hate Crime, the destruction of the NHS and the way local community resources and social care have become issues too big to tackle.

Next read two links that are seemingly unconnected. Read again about the differing views on how a Supreme Court judgement has changed little for disabled people, mainly wheelchair users, trying to do a very simple thing. In this case use a public bus service to do that most basic of things, get out and about locally and nationally. Unless we better understand the impact of years of legal action that ultimately fails to address the core issues we will fail to see why the lack of legal clarity on who has priority to use a wheelchair space on a bus has massive impact for disabled people and their families. Doug Paulley’s case made headlines and we should be grateful for his efforts to explain why all this matters, but sadly I see no change here and that’s a terrible thing in 2018.

Finally, have a look at the link that reports on more strike action on the railways. This industrial action is not about pay it’s about safety and service. It is about fighting the move to remove train managers / conductors from most trains. For disabled people everywhere it is a hugely significant battle because for many that second person on a train is an absolute lifeline.

Taken together the two stories about travel and the two about the DLA to PIP transition seem unconnected. But they are actually one and the same. All four stories are about the same things. Independence, Dignity, Civil Rights, Diversity and Isolation. The sub plot is about work and enabling policies that mean disabled people can play their part in everyday life in their community, pay taxes and NI contributions and be respected alongside everyone else.

2018 hasn’t started well for disabled people. But then it hasn’t started well for the shamefully high number of people living on our streets, waiting for urgent treatment at an A&E, or putting aside dignity and asking for help from a Foodbank. How have we allowed ourselves as a nation to become so cruel, so utterly disconnected from the reality of real life for millions in our ‘prosperous’ country ? A simple question with I know a complex set of responses, but the real danger is that we fail to see the connection between a range of policy decisions which in isolation are bad enough, but when taken together spell the biggest backward step in the lives of disabled people in the UK for fifty years.

All this and I haven’t even mentioned Brexit which is about to impact disabled people in a wholly disproportionate way. Will someone or some Party finally join up the dots and successfully explain that being this cruel, this destructive, this cold and uncaring is not who we are as a country, a society and the communities in which we live ?

thrn scroll down this Facebook page to 6/7 Jan posts…..