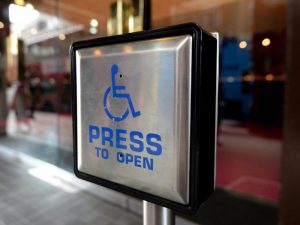 Disability Hate Crime is real, doors are closed to some as a result

Disability Hate Crime is not some vague notion in a statisticians head. It’s real, very real, and though hard to understand, and yes for many even believe, it happens and it wrecks lives.

This isn’t easy to take in. The links below do reel off the stats which to a degree show that the issue is getting worse, or unless you are a Govt Minister, that “more people are reporting Hate Crime”. More importantly I think are the stories behind the stats which detail the chilling impact of Disability related Hate Crime. People scared to leave their homes, isolated, alone, always looking over their shoulder. How the hell can one in three disabled people responding to a survey be telling us that this is their experience, their life ? This is 2017 yet ignorance and hate fuelled attacks on innocent people because of a disability, yes, a disability, are taking place up and down the country. It’s beyond my understanding and actually here’s the thing…..

You see I found it interesting that the first comment on Disabled Go’s news item about the stats on Disability Hate Crime was someone finding time to suggest that somehow they doubted the figures and the stories. They’d never seen anyone subjected to disability Hate Crime, not least down their street. Worse, they actually voices the thought that only those in “rough areas” must be experiencing such misery. The stats, bless them, suggest otherwise but no matter, if you haven’t seen it happen it can’t really be true, can it ?

Well thanks to strong voices in the disability community and some in local police forces across the country, not to mention a number of important charities and individual campaigners, people know it’s true and are fighting it. I’ve never seen disability Hate Crime but I know it happens, alongside some deeply depressing and often snide, childish, ill informed homophobic activity, which sadly can be found as often in the workplace as the Street.

When I got married to my gorgeous wife 11 years ago I told her that an angry member of staff I’d clearly upset with a management decision wrote, anonymously of course, to my office and in his missive voiced the opinion that “as a disabled person I should be grateful I’d found someone to marry me and stop upsetting him with new government directives….” or words to that effect !! People like this exist, their ignorance and stupidity is thankfully rare but I’d never have really believed anyone could behave like that.  The point being that people can surprise you with their apathy, natural bias and sheer lack of understanding. They need signposting to accurate information and powerful argument.

So if you get the chance to spread the word that Disability Hate Crime actually exists and can destroy lives….any Hate Crime…..then it’s well worth your time quoting a few stats and the impact behind those figures. Maybe more will take notice and speak up, because not enough are listening, nowhere near enough.