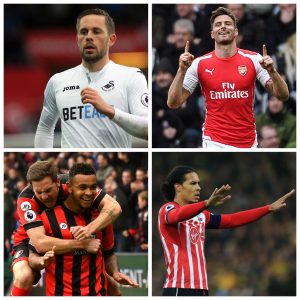 Two out of Four would do Everton !

Yes, two,out of four of these chaps would do very nicely Everton.

Next week should see us get close to securing most of Koeman’s transfer targets. He clearly sees Sigurdsson as a crucial part of the balanced squad he’s creating, but in truth the guy is more than that, he’s a key part of the plans for the best 11, I’m sure of it. He’s horribly expensive if it comes off. £40m plus add ons. It’s crazy money but I’m convinced he’s actually THE part of the jigsaw, with his excellent passing, crossing and of course dead ball expertise. It needs to happen before the first game of the season given our incredibly challenging start.

Olivier Giroud is interesting given the likely fee of £25m for a 30yr old which seems excessive but this is the fourth highest premiership goal scorer in recent years, and a forward who is great in the air, holds the ball up very well, has a range of passing and is a right nark. Just what we need and we do need at least one additional striker after losing the gobby git. Olivier is a bit slow we are told. Well he’s not a sprinter that’s for sure, but somehow he’s scored a lot of goals. Play to his strengths comes to mind.

Id still be surprised if Wenger lets him leave, particularly with Sanchez constantly rumoured to have had his head turned….apparently….tho in which direction who knows. If he arrives he’s the favoured option but Josh King offers a younger, faster, goal scoring alternative. He’s a punt of course because last years breakout season at Bournemouth followed some ordinary years but he’s got something about him and no mistake. £20m is last years £10m I guess, so he’s a bargain ! Will only happen if Giroud looks like staying at the Emirates or Koeman’s refuses to leave it until 31st Aug deadline day.

Ok I will be irritating everyone throwing in VVD when he looks certain to reward alleged tapping up with a move to a club struggling to make any proper impact on the transfer market these days. But you can dream can’t you and this guy, tho damaging his brand with the striking not playing thing, possesses the lot for me. Everton dithered and missed him at £10m a few years ago. But he’d give us a three at the back option that we know Koeman’s likes, not to mention pass and create capacity from the back. Not happening is it but even the click bait mentions are devoured like even a 1% chance of signing him should be. Sigh.

2 thoughts on “Two out of four of this lot would be very nice Everton !”