Apologies in advance. This is going to be a bit on the negative side as match reviews go. It was the champions elect. Yes we did compete, sort of, for an hour before simply succumbing to the inevitable defeat and generally disappointing performance that is the hallmark of pretty much any Everton game versus anyone sitting above us in the table.

But reading the reactions of many blues, across a range of sites, you could be forgiven for thinking that the message was “it’s just year one under Koeman, give it time, he’s seen now what’s needed in terms of building the squad etc etc and the summer will be busy. Then there’s more detailed reflection of who needs replacing and it’s here that you start to understand the issue. Essentially the common ground suggests we badly need two quality centre backs, an attacking, and experienced, right back good enough to cover Shays unfortunate absence. Then there’s Sigurdsson as the no10, a second top quality striker or two or three new strikers if Rom goes. A left back to cover Bainsey as if we’ve not had enough left backs at the club in the last couple of years. Oh and a genuinely left sided pacey winger. And let’s not forget two new goalkeepers as we currently don’t actually have a keeper at the club.

In order words we are seen by many Evertonians as virtually ripping up the current first team and needing to start again ? If that’s the case, and to be honest I’m struggling to disagree with much of the shopping list, then Koemans first year has been about a steady if unspectacular improvement from 11th to 7th and the half decent tho tinged with risks achievement of a Europa spot, complete with TWO pre qualification games, if we are lucky.

We we’re not over run for an hour against a very good Chelsea team but the way we suddenly collapsed in the final half hour was a reflection of the gulf in class between the two teams, as was the difference in the quality of the subs bench. The truth is Courtois hardly had a save to make of note. And after this we seem content to accept we are virtually starting over. I’m just not sure how we all think this is ok and a successful “transition” ?

Had we not ballsed up both the summer and January transfer windows, and we did mess them up, we really really did……then maybe transition might have meant just that, a clear steady improvement with measured team building in Year 2. Not going to happen is it when right now we can all see we don’t have the quality in defence and basically need to replace most of the incumbents. Sigh. 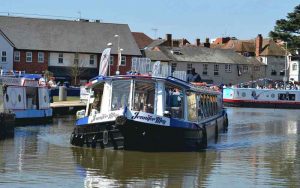 Accessible river cruising in the UK

Yes you can have accessible river cruising in the U.K. !!

Always wanted to cruise in a river boat? Here’s how!

Whilst visiting Windsor recently we were disappointed but not really surprised to find that not one of the river boats were reasonably accessible to a wheelchair user. So it’s great to see that those champions of accessible travel, The Bimblers, have unearthed a real gem here, accessible cruising in the gorgeous Stratford upon Avon.

Have a read and find out more! Oh and whilst your about it, follow The Bimblers !
http://ow.ly/10iOyT