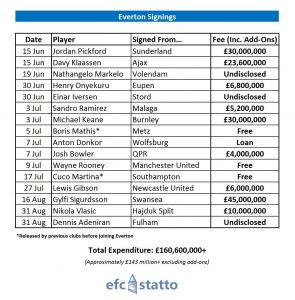 Where does the 2017 summer transfer window leave us? Was it a mess ?

Where does the 2017 summer transfer window leave us ? Well thanks to the very helpful “efc statto” and Twitter i think the table above gives a good idea as to how the Rom, Geri and Tom Cleverly sales money has been spent and the quick witted amongst you, well pretty much anyone really, will get the hint.  It seems we’ve managed to spend around £160.6m and received income from sales of approximately £109m if you allow £10m for the Rooney “free transfer” ? So net capital spend in-seaon is £51.6 and had the Niasse and of course Ross B transfers gone thru then wed be closer than Arsenal to a zero net outgoing, which takes a bit of doing these days given the Gunners current set of issues.

Overall Is this a negative assessment ? Yes. Does that mean we are doomed to finish below the clubs who the media have suddenly decided were much more canny than us in the market like, er, West Brom and spookily, Swansea ? Almost certainly not tho things are looking a bit iffy. Does it mean we’ve done more than keep,a steady seventh placed pace ? There’s the question that feels very hard to answer today as we head out of the international break towards a possibly defining moment, the clash with Spurs at Goodison.

Its been said already but it’s worth repeating. What went before deadline day mania still feels like reasonably good business. As it was happening it felt extraordinary. Exciting. Ground breaking. But in part this was down to the absurd scale of the transfer fees in a football world probably at the top of a transfer market curve. The hugely inflated fees paid are matched by what you can get for some very average players. It’s a cycle, it may not quite be over but let’s see. Truth is the players we have bought in feel like top sixish quality. The one player we let leave feels like a world class forward who whatever you feel about him as a person, which frankly matters not a jot, represents 25 goals a season, something most premier league clubs actually never, ever, get to enjoy.

Fact : we have failed to balance a squad full of talented midfielders and now three no10’s. The manager knows this and could see the urgency of bringing in a top class striker and left sided defensive cover. Worryingly it appears Mr Moshiri disagreed and seemed to indicate in his cosy chat with Sky’s Jim White aka EFC Communications Director, that he’s picking the team for the Spurs match. Ok, OTT but there’s something not quite right about the sub text of that very public assessment of our transfer window.

We are left with an unbalanced squad that has little pace to worry defences, hardly any aerial threat in open play, questionable width, and a back line that is bolstered by the impressive Keane, but has some aging and let’s be honest, really slow-to-turn centre backs. We lack goal threat, at least that’s the early evidence, and somehow we have taken two months not to replace Rom. Dress it up however you want. Tell me those 25 goals will be shared amongst Gylfi, Wayne, and Klassen from midfield etc. It’s a very tough ask in this league. Worse, lots are missing the point of the general dismay at failing to land a striker. It’s very simple, he is the pivot for those midfielders, the target man for Gylfi, a player to bring others in and to hold up the ball,at times of pressure. He’s the guy who helps enable those clever midfielders and a classy no10. We are not Barcelona. Playing without a recognised striker isn’t us ok. Sigh.

Defensively it’s interesting. Pickford already looks like a top, top, keeper. His commanding presence is refreshing. His distribution from the back impressive. But in front of him those slow centre backs, Keane apart, are willing and vastly experienced, but truth is Williams is not the player I’d hoped he’d be and Jags, surprisingly, is still here doing his usual committed job but should have been replaced by the likes of Harry Maguire who somehow we let wander off to Leicester, a missed opportunity if ever there was one. There is simply no effective cover for Baines with Mori out and if Bainsey gets injured it’s Cuco Martina playing out of position at left back, think about that for a while.

Deep breath. As Phil Kirkbride has said in the Echo, it’s not the sudden end of the season after three games. How Koeman’s reacts is now crucial. He is paid six million big ones a year to cope with this type of situation. My guess is that he will, at last, give the clearly talented DCL a proper run in the no9 slot. I think the lad will do well actually. Just not as well as a Giroud or a Batsuayi. But there’s a chance that this is DCL’s breakout season and he may take the league by storm. Fingers crossed. Klasic could also be a game changer and a pleasant surprise as his arrival passed largely under the radar whilst we were all howling about the failure to buy those two players. I think Gylfi is a superb buy who will do the business once match fit and I expect Sandro to improve, as will Klassen. Rooney ? Well until the news broke about his disgraceful drink driving nonsense I was hugely encouraged by his form, his leadership, his experience, his goals. Not so sure where’s going now but more of that in another blog…..

The Ross Barkley situation is damaging. For him as much as for us. Personally I’ve given up on him. He’s had brilliant support and sometimes some stupid boo boy type reaction that he’s taken to heart. His form has been so inconsistent it’s hard to know if we have lost a world beater or a player who just isn’t anywhere as good as he thinks he is. The tough love thing from Koeman has I think back fired. Ross is a child like sensitive soul and I’m not sure comments that made the boy look like the scapegoat for some aweful performances was the right approach. But what he’s done now looks so bad. So calculating. So unforgiving of a club and fans who have been there for him when he was badly injured or just playing like an idiot. I’d like to think he’s going to suddenly issue a statement this coming week that says sorry for wanting away, says he’s been a dork, tell us he loves us, signs a contract and swears to get fit and be there for the team and it’s supporters. More likely he thinks he’s off in January for a cheap ten mill. If that’s the case I’d make him train alone until 31st June 2018, never play him in a competitive match, destroy his unlikely World Cup dream and show him he’s not bigger than our great club. Harsh ? Maybe, but no harsher than watching £35m disappear and being treated with contempt.

So it didn’t quite happen, the golden transfer window that was to change everything. I’m not sure the money was actually there to be honest. It will seem like it was and let’s be clear, as the clever “amortisation” accountants will confirm, Mr Moshiri has signed off on a yearly commitment which has risen from £30m to over £70m in terms of ongoing player costs. That’s a huge commitment. But in terms of free flowing “capital” investment in the squad? I’m not so sure. We seem to have almost balanced the books and the sale of the errant Ross, McCarthy and even Niasse in January will get us close to that. Where’s a £100m injection of genuinely new money, that isn’t reliant upon sales income ? That’s the kind of added value that makes a squad grow quickly in quality and depth. The new stadium looks like a sensational development. There’s lots to like and savour about our U23 set up so well led by Unsy.

My gut tells me we’ve not quite done enough when we thought it was all about to get really, really good. A few injuries and we are in more trouble and Ronneys pathetic behaviour just highlights how quickly things can change. But balance those doubts with thoughts of the likes of Gylfi, Klassen, Sandro, Pickford, Keane and yes DCL really turning it on, AND then remember we get Seamus and Bolassie back before 1st December. It may actually be ok and I’m going with that because I can now watch us from the best view in the house at the Old Lady and I’m desperate for it to be a happy view !!!